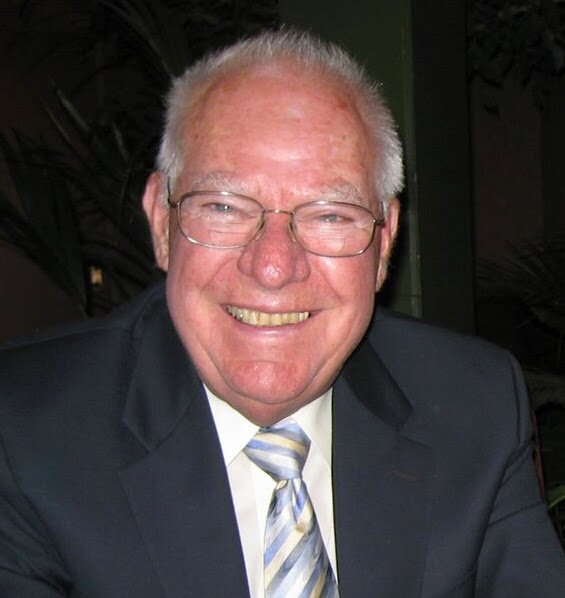 Please share a memory of George to include in a keepsake book for family and friends.
View Tribute Book

George T. Dunn, a lifelong resident of Brockport, NY, passed away peacefully of natural causes on December 12, 2021, at the Friendly Home nursing home, in Rochester, NY. He was 96. George was born on September 10, 1925, in the family home of his father and mother, George R. and Clara (Talbott) Dunn, on Centennial Avenue in Brockport. He had one older brother, James, a pilot, who died in a noncombat air accident in the UK during WWII. George attended local schools and worked for his father in the family business of that time, Dunn’s Funeral Home, until he left Brockport to attend college—first studying engineering at MIT, then business and marketing at the University of Michigan, where he earned his bachelor’s degree. It was at the U of M that he met his future wife, Betty (Kipf), on a blind date on New Year’s Eve. They were married on August 20, 1949, in Elyria, OH. In 1950, George moved back to Brockport to join the family furniture business. In 1956, George and his father opened the new building of Dunn’s Furniture Store, on 115 Main Street, its present location. In the coming years, the business and George’s family expanded; in 1959, the family moved from their home on Maxon Street to the refurbished funeral parlor at 44 Centennial Avenue, which would be their primary residence for the next six decades.

Throughout his years working at the furniture store and managing the business, George pursued enthusiastically a number of personal interests and hobbies. He served on the Brockport School Board, was an active sailing member of the Brockport Yacht Club for decades, and became a partner in the Brockport Cold Storage enterprise. With Betty, he enjoyed taking a number of vacations abroad. George loved to snow ski and fulfilled a childhood dream of earning his private pilot’s license. In the late eighties he toured the US extensively in a fifth-wheel motor home on solo trips and with Betty. They eventually bought property in Palm Springs, CA, in the mid-‘90s, where they enjoyed the weather, friends, and proximity to other West Coast attractions. George retired from the furniture store when he was 75, turning over ownership to his son, John, who continues to run the business that has been in the family over 100 years.

George will be remembered not only for his business acumen, civic participation, and personal interests, but also as a man of exceptional insight and kindness. He especially enjoyed conversations with family, good friends and new acquaintances, and had a rare gift for listening and paying close attention to the people and world around him. He was curious, took continuing education classes, and loved to read.

George was predeceased by his wife of 70 years, Betty, and is survived by daughters Carolyn (Brockport, NY) and Julia (San Diego, CA) Dunn; his two sons, Todd (m. Sharon Dalaba) and John (m. Wendy Wilkin) Dunn, all of Spencerport, NY; and six grandchildren: Dena (m. David Milliner) and Laura Emmerson; Erin and Colin Dunn; and James and Kate Dunn. Calling hours will be Tuesday, December 21, 4–7 p.m., at Fowler Funeral Home in Brockport. The burial will take place at a later date, and a memorial celebration of life service for Betty and George at St. Luke’s Episcopal Church will be held on Saturday, January 22, at 11 a.m., to be followed by a gathering at the Morgan Manning House. Donations in George’s memory can be made to St. Luke’s Episcopal Church or the Western Monroe Historical Society Morgan Manning House in Brockport.

To send flowers to the family or plant a tree in memory of George Dunn, please visit Tribute Store
Tuesday
21
December

Celebration of Life for Betty and George Dunn Rescheduled for April 30, 2022

There will be a celebration of life service and gathering for longtime Brockport residents Betty (1925–2020) and George T. Dunn (1925–2021) on Saturday, April 30, 2022, beginning at 11:00 a.m. with a service at St. Luke’s Episcopal Church, followed by a reception at the Morgan Manning House (to begin approximately 12:00 noon). Friends are welcome to attend either or both events, and can share memories of Betty and George at the Morgan Manning House. The burial for George Dunn will take place on Tuesday, May 3, at 10:30 a.m., at Lakeview Cemetery, in Brockport, and friends are invited to attend. In lieu of flowers, guests can make donations to either St. Luke’s or the Morgan Manning House.
Online Memory & Photo Sharing Event
Online Event
About this Event

Share Your Memory of
George
Upload Your Memory View All Memories
Be the first to upload a memory!
Share A Memory
Send Flowers
Plant a Tree