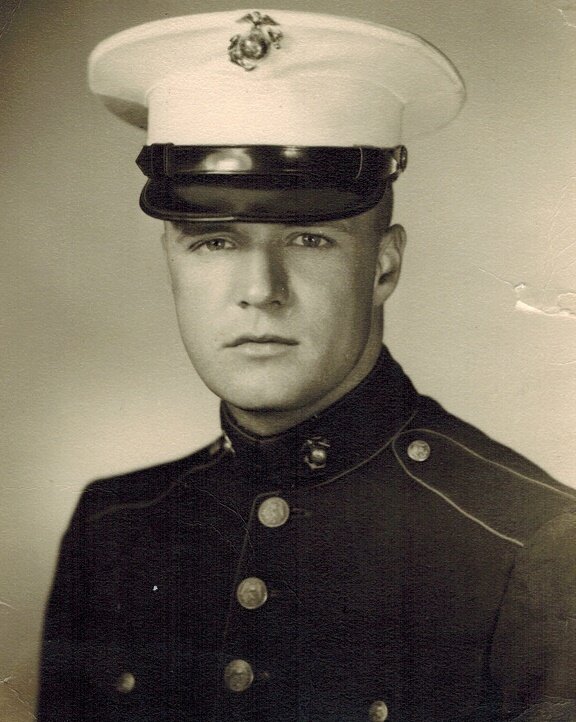 Please share a memory of Richard to include in a keepsake book for family and friends.
View Tribute Book

Brockport: Passed away peacefully on Thursday September 23, 2021, at the age of 88.  Son of George and Marion Reynolds.  Predeceased by brothers George and Donald, sisters Dorothy Ruger and Margaret.  He is survived by his loving wife of 68 years, Nancy; son Jeffrey (Sharon), daughters Anne and Terri Reynolds, sister-in-law Lucille Reynolds and many nieces, nephews and dear friends.  Richard was a Drill Sergeant in the United States Marine Corps where he proudly served from 1952-1955.  In 1954 Richard played baseball as a member of the US Marine Parris Island Base Team.  He earned his Bachelors and Masters Degrees in Health and Physical Education from SUNY Brockport.  He received his Director of Athletics Certification at Ithaca College.  He proudly taught and was Director of Athletics for 34 years at the Kendall Central School District. He enjoyed every minute and moment he was there.  His baseball teams earned ten Genesee Region Division Championships and were Section V finalists five times.  He also coached basketball from 1963-1977, with 8 Genesee – Region Division Championships, 5 consecutive Section V championships, and 57 straight victories from Nov 1974 – Nov 1976. Richard was awarded National High School Coach of the Year and the New York State Coaches Honor Award both in 1977.  He was named to the Brockport High School Wall of Fame in 2007, the Kendall High School Wall of Honor in 2013 and the Section V Baseball Hall of Fame at Frontier Field in 2017. Richard was an active member of St. Luke's Episcopal Church in Brockport. Upon retirement, he volunteered for several years at Lakeside Memorial Hospital. Richard worked hard but always had time for his family. He and Nancy loved traveling to Florida in the spring where they connected with family and friends.  During the summer months they traveled to various destinations in New England. Dick cherished Nancy and his children and always referred to himself as the luckiest man to have such a great family, great career, and great friends. He was quite an accomplished and special man who many consider their role model and will be dearly missed by family and friends.  A special thanks from the family to Wedgewood Nursing and Rehabilitation nursing staff for their TLC, kindness, and compassion they gave Richard during his brief stay.

A graveside service with Military Honors will be held on Friday October 1, 2021, at 1 pm in the Garland Cemetery where all are welcome.  A Celebration of Life will be held at a later date.  In lieu of flowers, those wishing may contribute to St. Luke's Episcopal Church, 14 State St. Brockport, NY 14420.

To send flowers to the family or plant a tree in memory of Richard Reynolds, please visit Tribute Store
Friday
1
October

Share Your Memory of
Richard
Upload Your Memory View All Memories
Be the first to upload a memory!
Share A Memory
Send Flowers
Plant a Tree