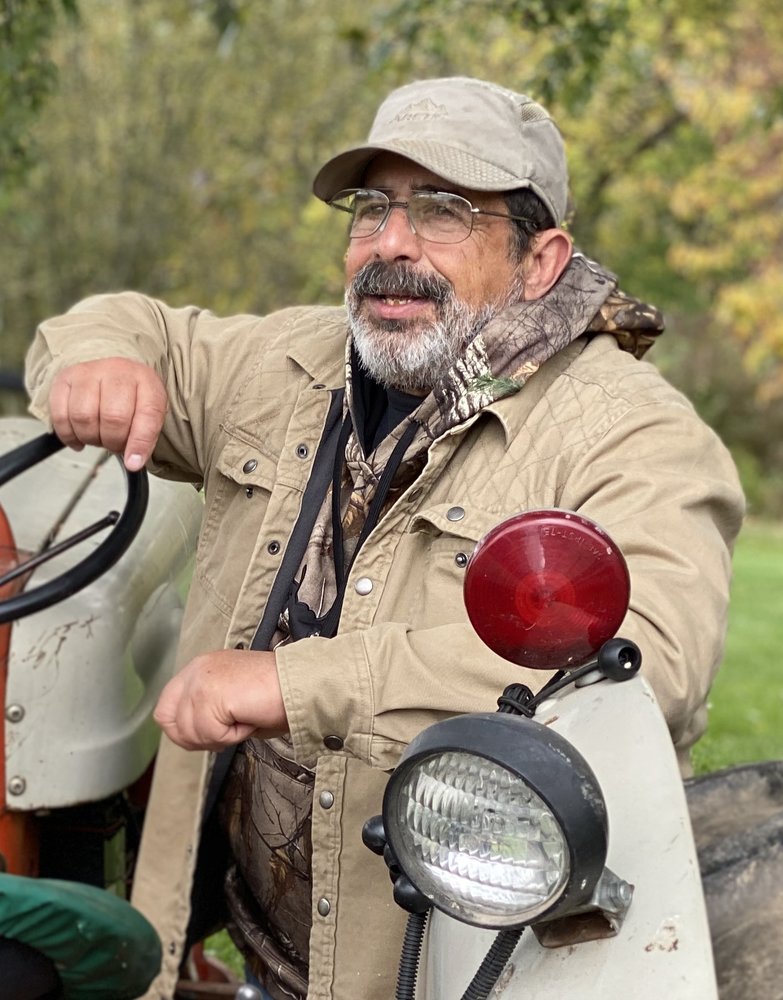 Please share a memory of Vincent to include in a keepsake book for family and friends.
View Tribute Book

Vincent James Flow III, 68, died at the family farm in Kendall, New York on Monday, July 5th, 2021 after a brief illness. He departed peacefully, surrounded by his loved ones. Vince will be remembered for his devotion to family, his sense of humor, his generous spirit, hard work, and conviction to his ­­­beliefs. He will be greatly missed by all.

Vince was born on January 3, 1953, to Vincent and Dolores Flow in Brockport, NY.  The second of four children, he was raised in a large, loving Italian family.  His siblings remember his love of the outdoors and animals from an early age.  He was always curious about the world around him.

Vince met the love of his life, Barbara, at SUNY Brockport.  She claims it was love at first sight and he did not argue with her! They worked together to build a beautiful family, farm, and business together- supporting one another every step of the way. Together, they shared in the joy of raising three successful children: Katie, Lisa, and Vincent.

Vince graduated from SUNY Brockport with a degree in biology in 1974. He began his career at Eastman Kodak Co in large scale chemical production. After about a year, he was transferred to the Research Lab where he worked his way up from technical rating to a professional standing and eventually became the worldwide expert in Eastman Color Paper Dispersion formulations. His work around the world led to 11 US Patents on the subject. His accomplishments and guidance gave his children the confidence to follow his footsteps into careers in science and technology.

After 37 years at Kodak, he retired in 2011 and focused on enjoying all that the land had to offer. He turned his passion for garlic and farming into a business he ran with his wife, Flow’s Willow Farms.  For many growing seasons, his parents would visit and help harvest, clean, dry, and process the garlic. Along the way, other family members and friends joined in the fun and all learned a thing or two about garlic. He enjoyed every aspect of the garlic business but what he loved the most was the relationships he built with the many people he met along the way.

Vince and Barb spent their early years together in Brockport, NY before putting down roots in Kendall, NY.  Vince was a dedicated father who always supported his children’s passions.  He was a youth baseball coach for Katie, Lisa, and Vinny. This led to cheering on Katie and Lisa in high school softball and then proudly cheering on Lisa as a Le Moyne College softball player. He was an assistant Cub Scout leader for Vinny and helped with many derby car races. In addition, Vince could be found attending Vinny’s theatrical musical performances and dance recitals for Katie and Lisa.  All three were active members of the Orleans County 4-H and it was a family affair when the Orleans County 4-H Fair came to town each year.

Vince was an outdoorsman at heart. He loved his dogs, hunting, fishing, farming, and woodworking. He was a man who enjoyed taking a hands-on approach to life. He loved refining his cooking skills; whether making sauce, canning fresh fruits or vegetables, or putting together his delicious meals. He especially enjoyed designing birthday cakes at the request of each of his grandchildren.  He was not afraid to try anything once and he cooked with the same regard.

He was always actively involved in his community. Many will remember his days on the Cornell Cooperate Extension Board as the Chairman of the Property Committee. He contributed to the Outdoor Adventure Field Journal as both field editor and secretary. He sat as member of the Kendall Republican Committee. He also worked at the Kendall Highway Department where he would take the night shift during the winter snow-watch making sure all of the roads were safe.

His friends knew the value of his word, his willingness to help, and the sound of his laughter. His personality was contagious to everyone he met. His former colleagues looked forward to their “gathering of the old guys” lunches and most mornings he could be found congregated around his kitchen table solving the world’s problems with friends over coffee.

Vince found true joy in his grandchildren- Alex, Sarah, Madison, Allison, Andrew, Vinny V, Hannah, and Samantha. All eight of his grandchildren felt the power of his love. He never tired of listening to their stories, giving Ranger rides through the fields, pushing them on the swing, having a little one snuggled on his lap, or playing the “Tickle Monster”. His antics would often send a room of children into unbridled laughter.

Vince is survived by his loving wife of 44 years, Barbara, his daughters Katie (Adam) Godlove of Grand Island, NY, Lisa (Bradley) O’Connor of Syracuse, NY, and son Vincent (Melissa) Flow IV of Brockport, NY. In addition, he is survived by his mother Dolores, sisters Susan Flow (Michael Livesay) of Keenesburg, CO and Mary-Jo Ehrlich (Felix Ortiz) of Albany, NY, and brother Timothy (Nancy) Flow of Sarasota, FL. He was blessed with eight grandchildren and many loving nieces, nephews, cousins, and a lifetime of good friends.

Share Your Memory of
Vincent
Upload Your Memory View All Memories
Be the first to upload a memory!
Share A Memory