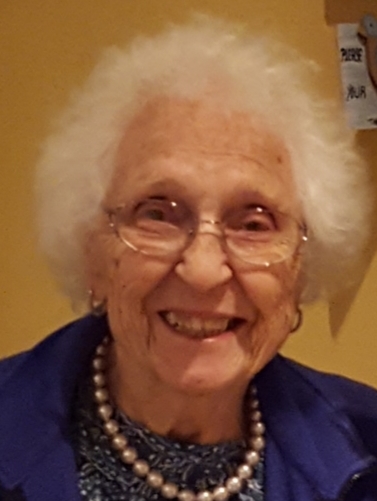 Please share a memory of Geraldine to include in a keepsake book for family and friends.
View Tribute Book

Geraldine died in Debary, Florida,  3 July 2021.  Gerry was born on the O’Brien farm on Lake Road, Clarkson to James C. O’Brien and Winnie D. Hoy O’Brien 11 December 1924, one of 15 children.
Gerry raised a herd of boys, Harry (Ann) Pratt, Texas, Douglas (Susan) Pratt, Florida, Timothy (Shin) Pratt, Texas, Steve (deceased) (Connie) Pratt, Clarkson, Jeffrey (Barb) Pratt, and Gregory S. Pratt.
She married Harry L. Pratt on 27 March 1942 and he went into the service, She followed in 1943 and had her second child in Mississippi.  They returned to New York and she bore two more boys in Warsaw, New York.  In 1951 they moved back to Brockport, bought a couple acres of land from her father and proceeded to build a house at 751 Gilmore Road and had another son.   After her eldest went into the service she had her youngest in 1961.  Her husband died in 1977.  Four of her sons served in Viet Nam, three of them at the same time on the same base.
Gerry remarried Raymond Leverenz   in 1985.  He died in 2002.  They had bought a house in Florida and would spend summers in New York and winters in Florida.
Gerry left behind 14 grandchildren, 32 great grandchildren and 4 great - great grandchildren. One sister Jacqueline Rowling of Waterport: many nieces and nephews all over.
Family will receive friends on Thursday July 8th from 2-4 and 7-9 PM at the Fowler Funeral Home Inc. 340 west Ave., Brockport.  A graveside service will be held on Friday at 2:30 PM in Garland Cemetery.  In lieu of flowers, those wishing may contribute to the American cancer Society.

To send flowers to the family or plant a tree in memory of Geraldine Leverenz, please visit Tribute Store
Thursday
8
July

Share Your Memory of
Geraldine
Upload Your Memory View All Memories
Be the first to upload a memory!
Share A Memory
Send Flowers
Plant a Tree