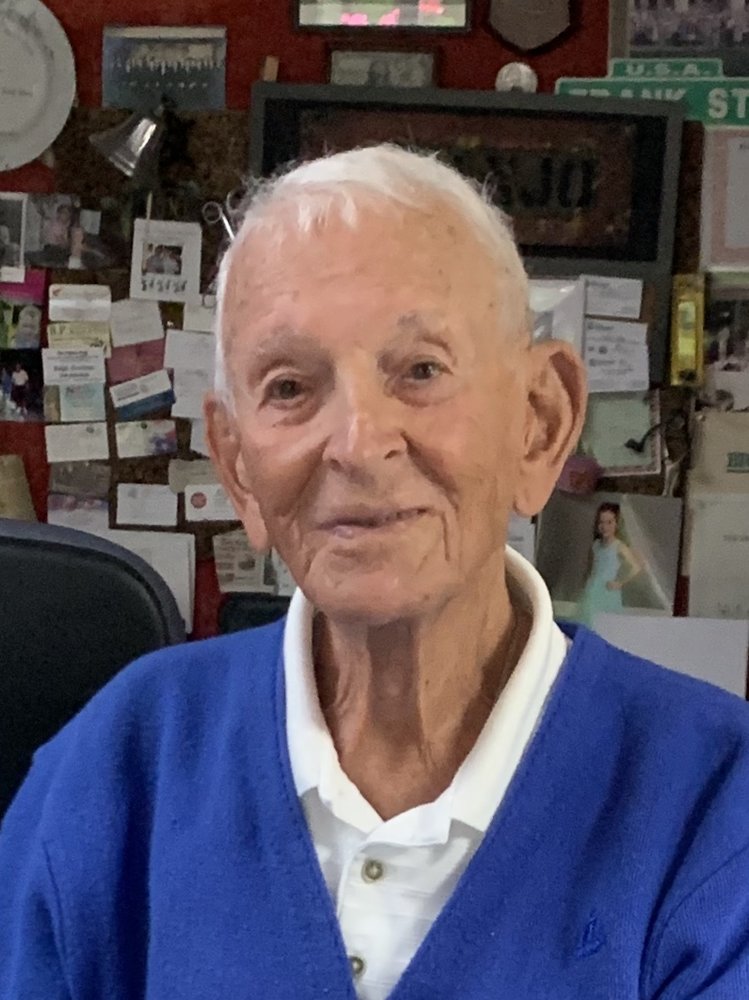 Please share a memory of Frank to include in a keepsake book for family and friends.
View Tribute Book
Frank L. Sacheli Brockport: Passed away peacefully on Wednesday, September 30, 2020 at the age of 100. Predeceased by his beloved wife Patricia (Curtin), sister Anne Root, brother Anthony, son-in-law- Gary Caruso and dearest longtime companion Antoinette “Toni” Ercolano. He is survived by his children Kathleen (Frank) Werber of NYC, John (Peggy) Sacheli of Batavia, Anne (Michael O’Brien) Sacheli of Danville, IL and Elizabeth “Libby” Caruso of Brockport, grandchildren Christopher (Gretchen) Reisig, Matthew (Maureen) Caruso, Peter (Jaimie) Sacheli, Mark (Melissa) Sacheli, Ellen Caruso, Elizabeth Werber, John O’Brien, Edmund “Ned” O’Brien, 7 great grandchildren Ryan, Katie, Charlie, Angelina, Mia, Joseph and Addy, many nieces , nephews and extended family Diane Ercolano, David (Kelli) Ercolano and Daniel (Peggy) Ercolano. Frank was an onion grower in the Elba Mucklands and cultivated many relationships with family and friends. He adored his grandchildren and great grandchildren. In his later years, Frank enjoyed many winters together with Toni in Ft. Myers, FL at Cross Creek, where they made many friends and memories. He was a longtime member and past President of the Brockport Lions Club. He served his community as Mayor of Brockport and was an active supporter of SUNY Brockport and Golden Eagle Athletics. To all, he was a role model for a life well lived. In honor of Frank, those wishing may contribute to the Brockport Lions Club or SUNY Brockport Foundation in his memory.
To send flowers to the family or plant a tree in memory of Frank Sacheli, please visit Tribute Store

A Memorial Tree was planted for Frank
We are deeply sorry for your loss ~ the staff at Fowler Funeral Home, Inc.
Join in honoring their life - plant a memorial tree
Online Memory & Photo Sharing Event
Online Event
About this Event

Look inside to read what others have shared
Family and friends are coming together online to create a special keepsake. Every memory left on the online obituary will be automatically included in this book.
View Tribute Book
Services for Frank Sacheli
There are no events scheduled. You can still show your support by sending flowers directly to the family, or planting a memorial tree in memory of Frank Sacheli.
Visit the Tribute Store

Share Your Memory of
Frank
Upload Your Memory View All Memories
Be the first to upload a memory!
Share A Memory
Send Flowers
Plant a Tree