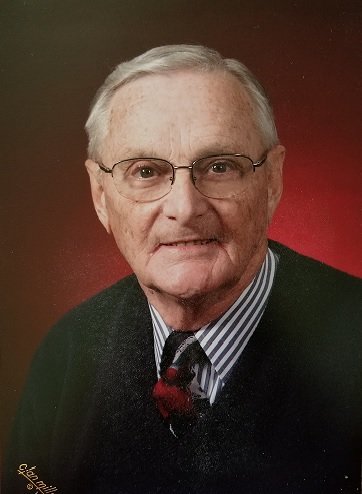 James Thomas Kenney, “Jim”, 88, of Brockport, NY, passed away peacefully on August 7, 2020, at home. Jim was predeceased by his wife Sheila (Fleming) Kenney of 40 years, sister, Mildred Pray and parents Alfred and Katherine Kenney. He is survived by his devoted family, daughter Deborah Kenney, Spencerport, NY and son, Darrin Kenney (Trina Ryan Kenney), Brockport, NY; four grandchildren, David (DeDe) Burns of Denver, CO, and Daniel Burns of Chicago, IL, Justine and Ethan Kenney, Brockport, and five great grandchildren; and several nieces and nephews. Jim was born and raised on Long Island, NY on February 21, 1932. He came to Brockport in 1950 to attend Brockport Teachers College where he met and married his wife Sheila, earned his degree in Education and in later years his Masters in Educational Administration. In 1954, he served in the US Army in Germany. Upon his return to Brockport in 1956 he began his 51 years in education as a reading specialist for the Rochester City School District. He moved to the Brockport Central School District as the Supervisor of Instruction. He then became the first Principal of the newly established Brockport Middle School and finished his administrative career as the Executive Elementary Principal for the district. Jim’s students were his top priority. He was well loved by students, teachers and staff. After retirement, Jim supervised student teachers for Roberts Wesleyan College and SUNY College at Brockport. He ended his career in education serving on the Brockport Central School District Board of Education for 12 years. One of Jim’s passion was flying. At age 67 he earned his pilot’s license and became the proud owner of his own plane. He was a member of the Brockport Free Methodist Church. Visitation will be held Sunday, August 9, 2020 from 3 – 7 pm at Fowler Funeral Home, 340 West Avenue, Brockport, NY. Graveside service will be held at the Garland Cemetery, 7743 Ridge Rd W, Clarkson, NY on Monday, August 10. 2020 at 11:00 am. In lieu of flowers, memorial donations may be made to an organization of your choice
To send flowers to the family or plant a tree in memory of James Kenney, please visit Tribute Store
Sunday
9
August

Share Your Memory of
James
Upload Your Memory View All Memories
Be the first to upload a memory!
Share A Memory
Send Flowers