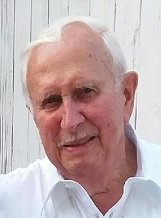 Dirk Lammes Sr., (Brockport) On Monday, August 3rd, 2020, loving husband, father and grandfather, peacefully passed away at Strong Memorial Hospice Center at the age of 85. He leaves behind his wife of 59 years, Thelma (Burkhouse) Lammes whom he was lovingly devoted to caring for, even while going through his own health battles. Survived by his children: Deborah (James) Redick and Dirk (Kathryn) Lammes; step-children: Elizabeth Mitchell and Jeffery (Beverly) Woodin; grandchildren: Nicole (Gage) Olschewski, Olivia (Anthony) Manfredi, Samuel Lammes, Miles Lammes, Thomas Mitchell, Justin Woodin, Sarah Woodin and Brian (Jayme) Woodin; surviving siblings: Alice (Charles) Lee, Marie VanWuyckhuyse, Gertrude Dailey and Dorthy Harris, predeceased siblings: Benjamin Lammes, Peter Lammes and Elizabeth Mulhern; Longtime, faithful friends, Myron Easton and Harley (Susan) Smith, as well as loved great-grandchildren, valued friends and loyal neighbors. Dirk was the youngest of a family of eight, born to the late Barond & Gertrude (Scharn) Lammes on October 25, 1934 in Rochester. Growing up a farming family, working with the earth had made its impact at a young age and after serving in the Army Amour Division driving tank, his childhood roots re-surfaced, turning earth once again, fulfilling a long, successful career as a Heavy Equipment Operator with Local 832. After retirement, his zest and passion for operating machinery, as well as his non-stop personality, found him turning the earth once again proudly working for his son’s company as an integral part of Lammes Excavating. It was no secret, to all that knew him, that Dirk was known as taking great pride in maintaining a meticulous, park-like lawn which no one dared to risk driving on. Neighborhood kids were ecstatic when allowed to play ball games after school on the groomed acreage in which he would often join them, playing as pitcher or umpire. A fan of NASCAR, boxing, old country music and local diners, his sense of humor & joking nature was known by many who joined him for a cup of coffee and willing to spar with him on whatever the “hot topic” was that started as “a” cup of coffee. For anyone he met his opinionated nature was evident allowing for some engaging conversation, if not an unexpected rise in blood pressure. A “food critic” at heart, he especially loved to indulge at holiday meals and if you were lucky enough to pass his standards, you’d feel honored to get his rating of approval by him commenting ’”Really good, really good.” You were golden if he asked for second helpings or a to-go container. One of the highlights for Dirk at Lammes family gatherings was the expectation that a couple tables would be set aside to accommodate the “card table.” It was he along with the other family patriarchs, who would be fixated for hours. The bonds that were forged through the decades had become memories as patriarchs were gradually lost but knowing the “card table” reunion will resume when they all meet again. Following a lung cancer diagnosis last spring, Dirk’s headstrong will allowed him to face a remission after treatments. That stubbornness & determination, even though tested with many health issues over these last few months, kept him fighting up until his passing. While in hospitals and a rehab center, he looked forward to homemade food deliveries and hospital staff would communicate often that his pride of his family was evident. His devotion of concern & love for his wife was conveyed via phone calls and FaceTime chats while he was away. His desire to return home and get on his zero turn to mow his lawn once again was a goal he often spoke as well as plans for another bbq with family & close friends. Although unable to make it home, his wishes will still be honored and he will be present in spirit as his life is celebrated on September 19th at 2PM, at his home. Family & friends are invited to attend. In lieu of flowers, donations can be made in his memory to a charity of choice. Please visit www.fowlerfuneralhomeinc.com to leave the family a message.
To send flowers to the family or plant a tree in memory of Dirk Lammes, please visit Tribute Store
Saturday
19
September

Share Your Memory of
Dirk
Upload Your Memory View All Memories
Be the first to upload a memory!
Share A Memory
Send Flowers
Plant a Tree