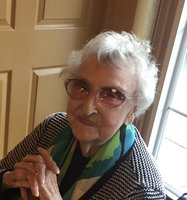 Gilda A. Ebel Brockport: Gilda passed peacefully at age 98, with John and Laura at her side at Evergreen Place. Born Gilda Restaino in 1922, to Amalia and Clemento, she married John F. Ebel in 1941. They had three children, Ronald (Mela), Sandra and John (Laura). Like so many of their era, World War II brought separation and great hardship to them. Ron was born just after John’s deployment and Gilda raised Ron with support from their mothers and family until John’s return, almost two years later, from active duty. It was a new life for them post war, filled with many blessings and challenges. Sandy was born in 48 and John (a well loved ooops) was born in 54. Gilda and John were together until his passing in 2009. Sandy was a baby when they moved into their Valley Stream home and they and we lived and loved there until mom moved to Brockport in 2010. Gilda and John loved to travel. They traveled extensively after his retirement. Gilda joined a gym, became an exercise fan (mostly for the fun, camaraderie, it was a good reason to get out of the house and to shower with someone else’s hot water). They loved their children, their daughters-in-law, grandchildren and great grandchildren. Gilda is predeceased by her husband John, son Ron, daughter Sandy, mother and father, siblings: Mack, Millie, and Julio and many other in-laws and extended family. She is survived by her son John (Laura), daughter-in-law Mela, Sister Ida (104 years old!), grandchildren: Terri, Ron, Tony, John, Jacob, Janice, Joy, Jenessa and Jeffrey and their spouses, great grandchildren: Emma, Andrew, Nicolas, Julia, Luke, Finley Elizabeth, John, Isaac, Giovanna, Nora, Liam, Shiloh, Gideon, Silas, Charity, Felicity, Finley Jackson, Esther, Jedediah, Rebekah, Nehemiah (probably more to come), nieces and nephews, extended family, many in-laws, and friends (especially those at Evergreen Place who cared for her during her last years and particularly during the pandemic).