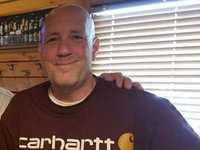 Paul W. Ritzenthaler Byron: Passed away after a courageous 5 year battle with cancer at the Crossroads House in Batavia on Friday March 20, 2020 at the age of 58. Predeceased by his wife Terry, parents Leo and Virginia and mother-in-law Nancy Flanagan. He is survived by his daughter Courtney (Justin) Waliszewski, sons Luke Ritzenthaler, Colin Ritzenthaler and George Ritzenthaler (Asia), grandchildren Marah and Shane Ritzenthaler, Noah, Logan and Myles Waliszewski, sister Debbie (Ernie) Covers, brother Michael (Sue) Ritzenthaler, father-in-law Thomas Flanagan, Sister in laws Mitzi (Dan) Yauchzee, Beth (Jeff) Nicoll, Lisa Specht, Brother in laws Tom and Todd Flanagan, Several beloved nieces and nephews. Paul grew up in Greece NY where he attended Greece Athena high school. Together with his high school sweetheart Terry, they had four beautiful children and 5 grandchildren whom they adored. Paul worked for Waste Management for 20 plus years until his battle with cancer forced him to retire. He enjoyed camping and sitting around a campfire with family and friends. Due to the Corona Virus Pandemic, the family wishes to keep their family and friends safe and will have a Celebration of Paul’s life at a later date. As an expression of sympathy, those wishing may contribute to the Crossroads House, PO Box 403, 11 Liberty Street, Batavia, NY 14021. The Crossroads House has been operating for 22 years and is run entirely on donations and volunteers. This allows them to provide a no cost service to their patients and their families